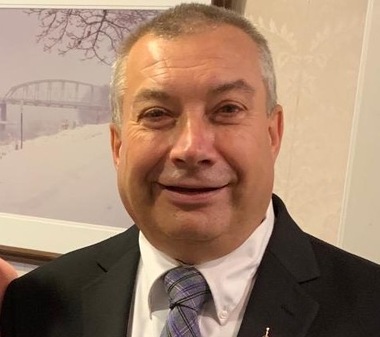 Back to Leon's story

Leon was a 1978 graduate of Danville Area High School.
He was previously employed by Smith Machine Shop in Danville, International Paper and was a plant operator at Danville Water Works for the last 17 years. In earlier years, he enjoyed his job as a Pennsylvania deputy game warden.

Leon was a member of Washingtonville Lutheran Church where he served faithfully on the Council and Cemetery Board. He also served on the Board of the Jane E. Delong Memorial Hall Association. His other memberships include the Washingtonville Volunteer Fire Company, 06 Rod and Gun Club, and the Danville-Mahoning Lodge 224 F&AM.

He was an avid Penn State football fan, outdoorsman, loved to hunt and fish, and thoroughly enjoyed woodworking. He also enjoyed taking "the girls" shopping.
Leon was a deeply devoted son. his faith and family were the foundation of his life and his humorous, light-hearted spirit was appreciated by many. Leon was a role model, mentor and friend who will be greatly missed. His absence in this world will be felt, but the richness with which he blessed people's lives will never fade.

In addition to his parents and his devoted wife of 30 years, he is survived by one daughter, Jen Russell and her husband Adam; one son, Ira "Steven" Wintersteen; five grandchildren; one sister and brother-in-law, Kara and Steve Aurand of Washingtonville.
Friends will be received from 6 to 8 p.m. Thursday, Jan. 16, and from 10:30 to 11:30 a.m. Friday, Jan. 17, followed by a celebration of Leon's life at noon, at the Washingtonville Lutheran Church, Washingtonville with the Rev. Melody Sell officiating.
Burial will be private.

Send flowers
in memory of Leon

A place to share condolences and memories.
The guestbook expires on April 12, 2020.

Full Of Love Bouquet was purchased for the family of Leon Allan Knapp by Mr and Mrs Tony Snyder and family.  Send flowers

Tony Snyder sr
He was a very special person who went out of his way to help everyone, my condolences to his family.
Jeannette Hauck, (Helen and Whitey Miller's daughter) Statesville, NC
Fond memories of Leon over the years at church. He always had a kind disposition and brought a smile to your face. May you be filled with peace and comfort in the months to come.
View all