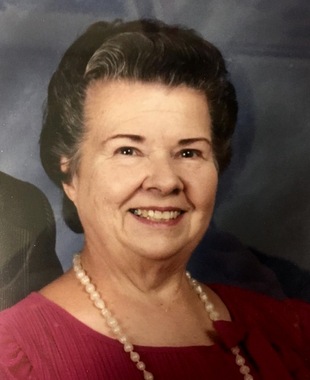 Back to Lorraine's story

Lorraine Jeannette Sandel, 85, of Danville, went home to be with her Lord and Savior on Wednesday evening, Feb. 27, 2019.
She was born Dec. 28, 1933, in Mahoning Township, Montour County, a daughter of the late Harry R. and Helen L. (Herring) Flore. She was married for 60 years to her beloved husband, the late A. Carl Sandel whom she married October 22, 1955.

Lorraine graduated from Ralpho Township High School in 1951.
In earlier years, she worked as the first dietary aide at Geisinger Medical Center.
She was a member of First Baptist Church, Danville where she served in vacation Bible school, Pioneer Girls, and was faithful in sending out bulletins to shut-ins.
Lorraine's life was centered around home, family, church and her friends. Her loving touch and kindness was felt by many with her faithful "card ministry".
She thoroughly enjoyed attending the Danville Senior Center where she was well known as "the secretary." She loved watching Lawrence Welk on Saturday evenings. Her greatest joy in life was spending time with her family, especially her grandchildren and great-grandchildren whom she adored.

She is survived by one son, Keith Eugene Sandel and his wife Ruth-Lee Evelyn Ricker Sandel; four grandchildren, Jana Hollenbach and her husband Joseph of Dornsife, Eric Sandel of West Milton, Sarabeth Borowiec and her husband Jonathan of West Henrietta, N.Y., and Aaron Sandel and his wife Lina Zamora of Lancaster; six great-grandchildren, Allison and Caitlin Borowiec andTimothy, Leo, Kinzley and Zoey Hollenbach; one brother, Kenneth Flore and his wife Patsy of Paxinos; and two sisters, Doris Sutton of Manville, N.J., and Diane Flore of Paxinos.

Relatives and friends are invited to attend a celebration of Lorraine's life to be held at 11 a.m. Tuesday, March 5, at First Baptist Church, 12 Brookside Drive, Danville (off 642 E.) with the Rev. Dawes J. Dunham officiating. Friends will be received from 9:30 to 10:45 a.m. prior to the service.
Burial will be held in St. Paul's (Straub's) Lutheran Cemetery, Danville.

Plant a tree in memory
of Lorraine

A place to share condolences and memories.
The guestbook expires on May 29, 2019.

Restore the guestbook to view the 8 more posts by family and friends, and share a memory or message of condolence of your own.